doxiadis+ is honored to be featured in the Financial Times. The article written by Jonny Bruce was published on November 3rd in the Weekend edition.

The two-page tribute is a retrospective of Thomas Doxiadis’ course in the field of landscape architecture, revealing his inspirations, influences, ideals and goals.

“Greeks describe this wild, aromatic scrubland as phrygana, a word that in itself has an almost mystical quality and evokes the essence of the Mediterranean landscape. […] It was the subtlety of these sun-baked hills and their increasing mistreatment that caught the imagination of a young Thomas Doxiadis in the 1980s […] With new wealth and a rise in popularity of the Greek islands came an explosion of poorly regulated building that blighted the landscape. “It was painful, like living in a house full of Picassos and suddenly they began to be painted over.” Doxiadis suggests the root of the problem lies in the garden as a locus for a utopian vision of the world”, where our idea of what something should be often destroys what is already there.

The work and philosophy of doxiadis+ focuses on regenerating the Greek wild as well as urban landscapes “while developing a more coherent idea of environmental stewardship and morally-led design”, through a variety of location-sensitive techniques described in the article.

For example, on Antiparos “the guiding principle behind this 40-acre development was to reduce the visual impact on the landscape. In collaboration with other architects, they designed a landscape that swept around low-profile houses, built from local stone and connected by roads that followed the site’s historic terracing.”

“Although it was the wild phrygana that inspired Doxiadis he is convinced of the importance of bringing these endemic, often endangered, species into the city environment.”

The article finally enlightens doxiadis+ principle to contribute through their work to the ongoing struggle for the ideal of democracy and justice.

““We treat all of our work as didactic to help people see the importance of the native landscapes and plants, the beauty of the land, and our common great responsibility to be their good stewards,” he says. This approach is inextricably linked to Doxiadis’ belief in the political potential of designed space. [...] Doxiadis remains convinced that by bringing the phrygana to the city, not only will it open the eyes of Athenians to the magical diversity of its landscape but will also do its bit for democracy.” 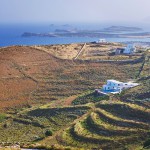 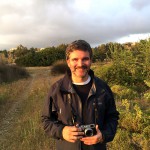 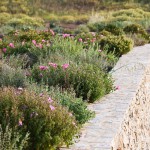 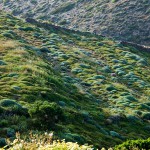 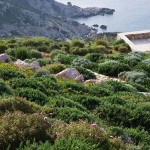 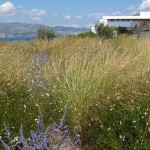 Indigenous species in a private garden on Antiparos island. 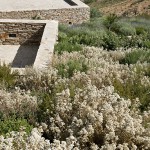